The most anticipated football league in the world will start its 2013/14 season this weekend. The first week of English Premier League fixtures don’t serve up any big matches but all eyes will be on champions Manchester United as they travel to play a capable Swansea City without their successful manager of 26 years, Sir Alex Ferguson. 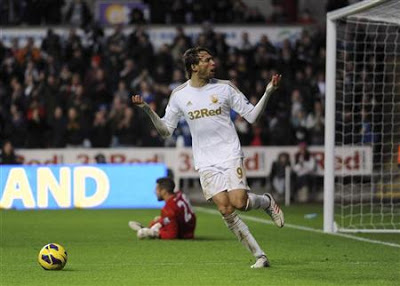 Swansea City
What a magical season 2012/13 was for Swansea City. Few would have predicted a ninth placed finish and a League Cup triumph at Wembley. Joe Allen, Scott Sinclair and manager Brendan Rodgers had all departed the Liberty and in was Michael Laudrup, a wonderful player but very much an untested manager. He brought with him players from La Liga, most of whom were virtually unknown but they were the ones who shone the brightest as Swansea defied all expectations. With Michu leading the way, Swansea blew away the competition and, alongside West Brom, were one of the surprises of the season. They stayed true to their philosophy of attractive football and since their success Laudrup has been linked with jobs at PSG and Real Madrid.

Despite last season’s league success, Swansea have once again dipped their toes into the transfer market, signing five first team players already. The most expensive is club record signing Wilfried Bony, who arrives from Vitesse for £12 million. The man nicknamed ‘Daddy Cool’ racked up 31 goals last season in the Eredivisie and he seems to be the perfect player to take the pressure off Michu. The Spaniard started to wane towards the end of last season, he only scored five times after the New Year and a lot of that can be put down to Swansea’s over dependence on him. He isn’t a natural striker, he was just filling in and having an out and out forward like Bony could really help Swansea. Jonjo Shelvey has joined from Liverpool and seems to already be enjoying his football. Swansea brushed aside Europa League opponents Malmo 4-0 before holding them out to a goalless draw in Sweden last Thursday. Michu and Bony struck up an instant understanding in bagging three of the goals against the Swedish League high-flyers. Robin van Persie’s double provided David Moyes with his first trophy as Manchester United manager following a comfortable 2-0 win over Wigan Athletic at Wembley in the Community Shield. Last season’s leading scorer headed United in front after just six minutes and his deflected effort before the hour mark put the seal on a controlled display. After a mixed pre-season, in terms of results and performances, new boss Moyes will be satisfied to claim a piece of silverware in such straightforward fashion after Wigan failed to turn up. United have seen a bid to buy Cesc Fabregas rejected by Barcelona while star player Wayne Rooney has been linked with a move away from Old Trafford, despite the club insisting he is not for sale. Moyes is scrambling to recruit reinforcements as he looks to step out of Sir Alex Ferguson’s shadow.

David Gill, Ferguson’s closest ally and a time-served operator in the transfer market, also stepped down in May to be replaced by Ed Woodward, a relative novice who has embarked on a steep learning curve as he tries to execute the new manager’s wishes. So far his recruitment drive has started and ended with Guillermo Varela, a 20-year-old full-back who is a fringe player at best, as Moyes’ quest to land one or more major signings continues. The Scot had an initial £12m bid for Everton’s Leighton Baines rejected and is considering a further one, alongside an offer for the left-back’s club colleague, Marouane Fellaini. The 50-year-old will draw comfort from his two previous visits to the Liberty, where his Everton side engineered 2-0 and 3-0 victories. In fact, Moyes is the only manager to have won twice in league combat at the Liberty since Swansea made it to the top flight.

VERDICT: Swansea City 28/10
United have traipsed all over the world, visiting Thailand, Australia, Japan, Hong Kong and Sweden for sponsorship and merchandising reasons. They’ve only won two of the six games they’ve played, Rooney hasn’t featured and the team has clocked up some eyebrow-raising air-mileage. Contrast this to their opening day opponents Swansea, who won all six of their preseason games by a collective margin of 28-1. Swansea have built up a reputation for denying the top Premier League clubs the three points at the Liberty and are tipped to do just that here by claiming a victory against the champions.