This year’s Telkom Knockout final will not feature any of the “big three”, with slightly lesser known SuperSport United taking on Platinum Stars. The last two standing were responsible for knocking out Kaizer Chiefs, Orlando Pirates and Mamelodi Sundowns en route to the final, which will be played on Sunday at Orlando Stadium. Current champions Platinum Stars were written off in defending their Telkom Knockout title when they were pitted against Kaizer Chiefs in the quarter-finals, but Dikwena went on to once again prove themselves as cup specialists and also ousted Pirates, whom they beat in last year’s final. SuperSport’s run was inspired by new coach Gordon Igesund, who has done wonders for Matsatsantsa since replacing Cavin Johnson. SuperSport United
SuperSport advanced to their first cup final under former Bafana Bafana coach Igesund after a well-deserved 2-0 victory over Pirates, with the goals coming from Lebogang Manyama and Dove Wome in the first half. Matsatsantsa have enjoyed an impressive run of form since Igesund took over in September, gradually climbing up the table. They now have six wins from their last eight matches in all competitions. SuperSport conceded a stoppage time goal on Sunday to lose 2-1 at home to Pirates in the league. However, Igesund wouldn’t be too concerned as he played the match with several key players missing. They were without captain Clayton Daniels, Michael Morton and Thato Mokeke. Daniels was suspended, while Morton was sitting on three yellow cards and Igesund chose not to risk him as another would mean he would have to miss the final. Mokeke had surgery to his thigh and was left out to recover in time for the final.

SuperSport started the tournament at home to Free State Stars where they won 1-0. They were then given a tricky test away to Bidvest Wits but came out unscathed earning a 2-1 victory. Their performance against Pirates in the semi-finals was excellent and warrants their title as favourites coming into this clash. Togo international Wome is SuperSport’s top goalscorer with seven goals from thirteen appearances in all competitions. The attacking midfielder/striker is on loan from Mamelodi Sundowns, but has stunned his employers with his prodigious form in front of goal. SuperSport also have attacking midfielders Manyama and Thuso Phala who have an eye for goal while the well travelled Dino Ndlovu is expected to spearhead the attack. Defensively SuperSport look solid with Daniels and Thabo September making up the centre back pairing while left-back Sibusiso Khumalo will be looking to add to his superb Bafana Bafana performances against Sudan and Nigeria. 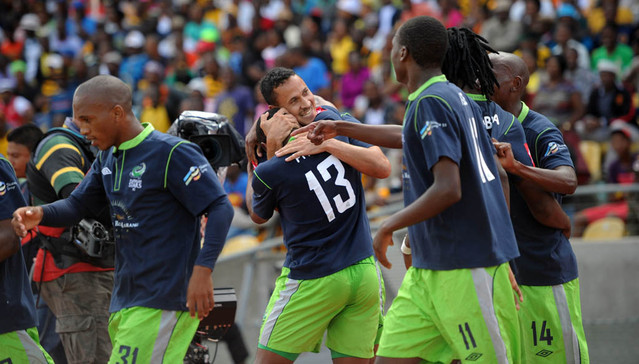 Eleazar Rodgers scored a hat-trick as Platinum Stars warmed up for the Telkom Knockout final with a 4-2 win over AmaZulu at the Royal Bafokeng Stadium in Rustenburg last Saturday evening. Pressure has been rising for Freese over Dikwena’s precarious league form, but the Telkom champions honoured their coach by moving out of the relegation zone with a superb showing. Dikwena started the defence of their Telkom Knockout title with a 1-0 home win over Chippa before stunning Chiefs with a penalty shootout win in the quarter-finals. They then dumped league champions Sundowns out of the tournament with a 1-0 victory courtesy of a goal from the in-form Rodgers in the semi-finals. One advantage Stars will have in this match is their cup pedigree. They made two finals last season, lifting both the MTN8 and the Telkom Knockout.

Since joining Dikwena a few weeks into the season, Rodgers looks to have settled in well and is rediscovering the form that earned him a move from Santos to Sundowns in 2012. Stars have clearly lacked a quality striker since Henrico Botes fell out of favour towards the end of last season. Rodgers is partnered up front with former Pirates striker Ndumiso Mabena who has done well to net five league goals this season. The pair will surely hassle the SuperSport defence and any lapse in concentration will be punished. Platinum Stars’ major problem this season has been their away performances where they have lost four of their five travels. They are coming off two good victories over Sundowns and AmaZulu at home and will need to carry that confidence to Orlando Stadium.

VERDICT: SuperSport 13/10
SuperSport are expected to take the game to Platinum Stars, who will look to stay solid defensively and catch SuperSport on the counter. The sides met in a league encounter in December with SuperSport earning a comfortable 3-1 home win. SuperSport have been impressive under Igesund while Platinum Stars’ last two wins are probably the best they’ve been all season. SuperSport have a superior attacking line-up and are tipped for the win in normal time.