It pays to finish top of your group in this competition. Arsenal have ritualistically drawn the cream of the crop in the Champions League and this year is no exception. The Bavarian giants have looked foreboding this season. Some questioned the thought process behind Guardiola joining a club fresh off a historic, all-conquering campaign. He has answered the question by clearly indicating that Munich’s agenda goes beyond trophy hunting this season; he is attempting to transform the identity of Bayern Munich from stoic dependability to wine and dine football. Aside from the Liverpool league mauling, Arsenal have made steady progress this season. This, however, could be a defining moment in the season for a club whose fans are demanding a little more substance with their style. Arsenal
Arsenal’s incongruous bounce back against Liverpool in the Cup will give a much needed injection of confidence into a group of players who had begun to look a tad jaded in recent weeks. The improved performance of Mesut Ozil was also a significant footnote that could have permutations against the mighty Bayern. Most importantly, Wenger was able to pull the rabbit out of the hat without risking the likes of Giroud, Sagna and Cazorla. Wilshere also missed the game and will play a huge part in both propelling Arsenal counterattacks but also in trying to boss the midfield.

Wenger may be tempted to put Flamini in the side for his ability to break up play. If you had asked me at the beginning of the season, that would have been the thing to do. But as the season has progressed I have noticed his mobility has slackened, directly resulting in that horror tackle that saw him suspended recently. I think he has become a liability in fast tempo games and Wenger should probably opt for the more reliable Rosicky in the holding role. Arteta has shown his inability to play that role on the back-foot, something which Wenger must assume he will be doing for large portions of the game. Gibbs will add pace in defense while Giroud is going to be vital in holding up the ball for the likes of Ozil and maybe Podolski to join in.

Arsenal need to get a foothold in the game and avoid anything like the early capitulation they experienced against Liverpool. The absence of both Walcott and Ramsey has really hurt the side, despite the hard work of Oxlade-Chamberlain. This is not just any side visiting the Emirates. Munich have been exhilarating this season and will test any vulnerability in the Arsenal make up. 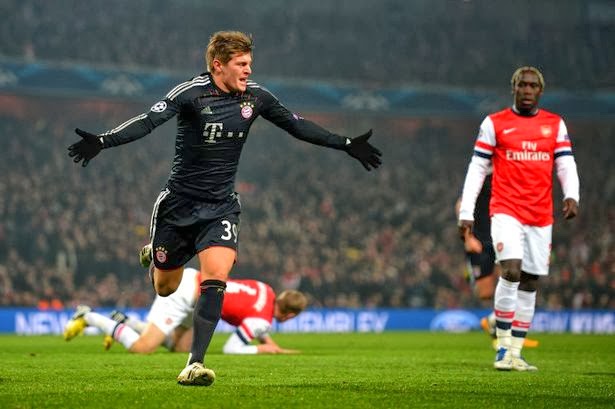 Bayern Munich should be sufficiently confident to get past the bad juju when it comes to English sides. Ole Gunnar Solskjaer and Didier Drogba must still give Bayern fans nightmares, not to mention their loss to City earlier this season. The injury to Franck Ribery will no doubt have disrupted Guardiola’s thought process to some extent. The truth, however, is that Munich have such an array and depth in their squad that his absence can be nullified to a large extent. The pace of Robben will always threaten on the right, while Thomas Muller and Mario Gotze are persistent goal threats that aid Mandzukic up front (before Robert Lewandowski arrives). And directing the traffic you have the imposing ‘neo-Kaiser’ in the form of Bastian Schweinsteiger.

In reality, the basis of Munich’s success this year has been their solidity at the back. Of course, there was that uncharacteristic blip at home to City, but that game had little value and one sensed that Munich were somewhat on autopilot. Lahm and Rafinha have been unbelievable while Dante and Alaba consistently show their versatility and flair. I have the feeling that Guardiola may opt for Alaba in the midfield in order to negate the hyper-kinetic passing system that Arsenal have. This could see Boateng join the defense while Toni Kroos may miss out. With the likes of Alcantara and Shaqiri floating around, Bayern have an abundance of riches to call upon in their quest for back-to-back Champions League titles.

VERDICT: Bayern Munich 7/10
Bayern Munich just have too much talent and efficiency for an Arsenal side missing critical players. Walcott’s pace would have been a critical factor. Wenger should be bold and throw Gnabry into the mix with his pace and power. He will not do that in a game of this magnitude, regardless of the good it would do. Arsenal have just had too many big games, I can’t help but feel that they will be feeling drained at this point. Munich are so far ahead of the game in Germany that all their endeavors have been made with this game firmly in mind. That, coupled with their obvious pool of talent, should book them a comfortable win.