Written by Chadley Nagel for @Hollywoodbets.

Pep Guardiola will attempt to mastermind victory for Bayern Munich against his former club Barcelona in what looks to be a thrilling display of passion, passing, possession, attacking skill and flair. It’s goals that decide games and there is no doubt this semifinal will feature some of the best goal scorers in the game. The match will also be special for Barcelona playmaker Lionel Messi, who will make his 100th European appearance for the club. 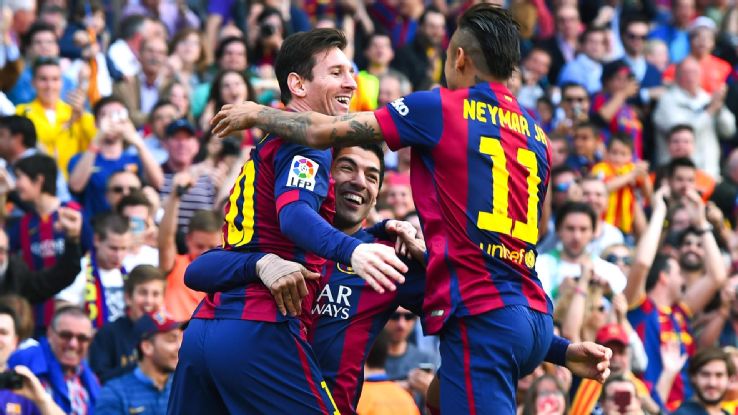 Barcelona
Barcelona are more balanced and complete than they’ve been in a few years, with their All-Star attacking trio of Messi, Neymar, and Luis Suarez making life insanely difficult for opposing defences in Spain and Europe, and their defence and midfield are performing at high levels as well. They swept Paris Saint-Germain and Manchester City away with ease in the knockout rounds but will be up against fierce opponents in Bayern Munich.The La Liga leaders have won their last two matches by a combined score of 14-0, with Saturday’s 8-0 win over Cordoba almost routine in its delivery. A 6-0 victory against Getafe four days earlier had taken the breath away, particularly in a first half in which Barcelona scored five times and Messi, Neymar and Suarez showed all their individual and collective brilliance.

Luis Enrique’s team also have a very strong midfield. The midfield trio- Sergio Busquets, Andres Iniesta and Ivan Rakitic are all in form and ready to run against any team in the world. Barca’s hopes for a treble are still alive as they reached the Copa del Rey final and lead La Liga by two points with three matches to play. The Bundesliga champions appeared out for the count after a 3-1 first-leg defeat to Porto in the quarter-finals amid a flurry of injuries. But the mood around the Allianz Arena has been dramatically transformed. Bayern blasted the Portuguese champions 6-1 in the return in Munich to claim their fourth straight semi-final appearance. The Bavarians have a world-class goalkeeper in Manuel Neuer and a solid defensive unit in Jerome Boateng and Dante. Going forward they will rely on the creativity and dynamism of former Catalan Thiago as well as getting the likes of Juan Bernat and Philipp Lahm into attacking positions down the flanks while striker Robert Lewandowski is a major doubt after breaking his jaw and his nose against Borussia Dortmund last week.

Guardiola’s big task will be to stop the influence of Messi, particularly his recent penchant for cutting inside and playing devastating passes over the top to Neymar and Suarez. Beating Barcelona at the Camp Nou will be a difficult challenge given the fact that they are unbeaten there in their last 10 games in the competition where they’ve won nine times. Although, the last team to beat them on their turf in the Champions League was Bayern Munich, who won 3-0 in 2013. Unfortunately, Guardiola has a long list of injuries and a few key ones heading into the trip to Spain. Arjen Robben, Franck Ribery and David Alaba all remain sideline, but Javi Martínez could feature having made his return from serious injury at the weekend.

VERDICT: Barcelona 19/20
The Catalans will be motivated to get their revenge this time and come into the clash in fantastic form – unbeaten in their last 14 games with 13 wins. Barcelona’s attack is unmatched anywhere in the world, with South America’s cream of the crop all playing at the top of their games individually and collectively. Simply stopping them will be a tough ask for any team, let alone a Bayern defence that can be vulnerable, particularly on the break. Back the Catalan giants to oust their opponents in this match which would likely lead to them booking a place in the final.