This encounter is an interesting blend of contrasting domestic fortune that will go a long way to determining the overall complexion of the group. Bayer Leverkusen are flying high under former Liverpool stalwart Sami Hyypia. Munich’s demolition of Dortmund on the weekend only served to emphasize Leverkusen’s status as perhaps Munich’s closest title contenders. United have flattered to deceive, with a uniformly mediocre performance at Cardiff providing David Moyes with more uncomfortable media cannon fodder to deal with. The winner of this one will guarantee qualification, which should make for a wide open, expansive game of football. 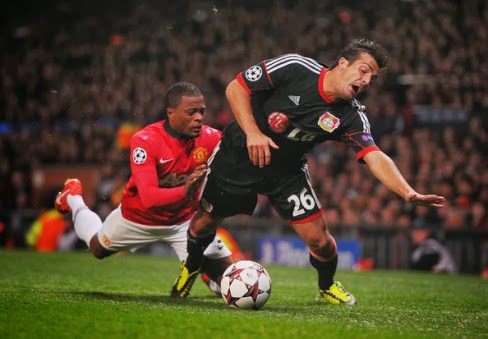 Bayer Leverkusen
Sami Hyypia has really done a miraculous job at the unfashionable Leverkusen. One also has to take into account the value of having former national coach Rudi Voller as the club’s sporting director. Leverkusen have shown the ability to adapt their game plan to the rigors of both domestic and European competition. They managed to keep the pressure on Munich this weekend with a hard fought, tenacious victory at Hertha Berlin. They may, however, have done more harm than good in the game with influential playmaker Sidney Sam now sidelined for this crucial fixture through a thigh injury.

Sam has been in devastating form for club and country, scoring eleven goals thus far for the German national team and Leverkusen. This will heighten the creative pressure on the club’s top goal scorer Stefan Kiessling. The dynamic striker has been sensational thus far this season, his partnership with Sam has already contributed a whopping fifteen goals. Recently announced Australian footballer of the year, Robbie Kruse, will likely replace the dynamic Sam on the opposite wing to South Korean superstar Heung Min-Son. Lars Bender will bring much needed solidity to the midfield alongside captain Simon Rolfes. They will be mindful of the manner in which they were overrun in the 4-2 loss at Old Trafford. Their defensive shape looks fairly solid with Philipp Wollscheid and Omer Toprak forming a formidable defensive partnership. That is where I feel the tie could be ultimately decided; it may depend on how well the side copes with the likely strike partnership of Robin Van Persie and Wayne Rooney. United were actually quite woeful at Cardiff, where they clearly missed the decisive finishing capabilities of Robin Van Persie. There is some good news for United. Vidic should have recovered from concussion and he will most likely pair up with long time partner Rio Ferdinand in the heart of the United defense. Michael Carrick will continue to be a loss through an Achilles injury which really destabilises the midfield. Fellaini will miss the game through suspension, which puts added pressure on a midfield unit that continuously fails to impress. But I think that thinned resources may actually be a blessing in disguise for David Moyes in choosing a suitable midfield partnership.

Ryan Giggs looked supreme for the short time he occupied the field in Cardiff and may come in to partner Cleverley in the heart of the midfield. Giggs is still probably the most creative United midfielder and would be the perfect counterfoil to Cleverley’s pugnacious industrialism. Kagawa has yet to establish himself in Moyes’ reckoning and will probably start on the bench. Welbeck will probably play in the wider role which has come to typify his international career. But the real crux of the game will be the efficacy of the Van Persie-Rooney duo. Rooney misses the indomitable Dutchman when he is unavailable; his all action style prevents United from sustaining a persistent goal threat as he consistently drifts in and out of attacking areas. However, Van Persie’s presence gives him free reign to indulge all his Energizer Bunny impulses.

VERDICT: Draw 23/10
I expect an extremely open encounter with both sides knowing that a win will guarantee qualification for the knock-out stage of the competition. I take a lot out of the 4-2 home victory for United, which showed that both sides have a propensity to abandon the midfield battle in favor of all-out attack. This should make for a great spectacle that will set up an enticing set of final fixtures.

The man knows his football, but even he gets it wrong from time to time. Feel free to share your view below.
Related TopicsBayArenabetbettingECLfootballManchester UnitedOddspickspredictionpreviewRyan GiggsSami HyypiatipsUCLUefa Champions LeagueWayne Rooney