Luis Enrique’s all-conquering Barcelona cruelly highlighted their La Liga dominance this weekend with a systematic demolition of Real Madrid. The fact that Enrique only had to introduce the world’s best player at the hour mark spoke volumes to the gulf in class that the Catalans have gradually eroded between themselves and the chasing pack. They need only a point on Tuesday night, while Roma are currently embroiled in a fierce fight for that second qualification spot. Rudi Garcia’s side garnered a commendable point first time round against the defending champions, but injury concerns and a dip in form could open the door for Bayer Leverkusen to gain the intuitive in the group. BarcelonaLionel Messi’s absence has been handled with the casual indifference of a thigh strain to Liverpool’s Lucas Leiva: It’s unfortunate for the player, but the team will be alright. Perhaps I’m being a tad facetious: Messi is certainly the world’s best player. The question really is, how good can this Barcelona side become?  Rakitic is beginning to look imperious alongside an evergreen Iniesta in midfield. The side have not conceded a goal for five straight games, dispelling the often held myth that Barcelonan is an inherently frail defensive unit. Neymar and Suarez have both reveled in the master’s absence, both staking potential future claims to the mantle of World’s best player.

Barcelona have won seven out of nine home games in the Champions League to Italian opposition, drawing the other two. Javier Mascherano may be a doubt following the Real match, which will likely see Matheiu enter the fray this week. Rafinha and Douglas remain sidelined, while Vidal and Turan still await the New Year until they can compete in this competition. I don’t think much of that information will deter Enrique’s side. This is Barcelona, not a Jose Mourinho side, so the fact that they only require the single point will not dissuade them from going all out in dispatching Roma. 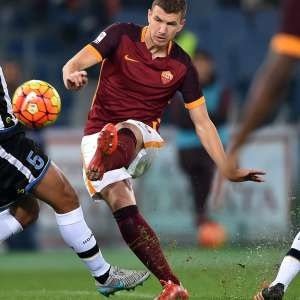 A.S Roma
Roma remains the only side in Champions league history to have not tasted defeat at the hands of Barcelona having played two or more games against them in the competition. Their finely tuned counterattacking style is perfectly suited to counteract Barcelona’s tika taka frivolities- it’s eerily similar to the manner in which Mourinho’s Inter Milan held sway over a far superior Barcelona side. However, this Roma side will be without a few of their key talents this week. Gervinho and Salah are arguably their quickest players, providing both width and impetus in those swift counter thrusts. Both players will miss this encounter, while the totemic Totti will also miss out due to injury.

This is a gigantic loss for a side that always threatens to offer so much in the early stages of the season. They will still have the impressive target man that is Dzeko while Pjanic will probably be their key creative inspiration. I fear for Roma. I really thought that they had it in them to perform an upset over Munich last season in the quarter-finals following an impressive showing at the Allianz Arena. But Munich went to Rome and destroyed not only Roma, but the broader reputation of Serie A with a thumping 7-0 victory. I feel that their counterattacks will be mere exercise in rhetoric, unable to stretch a Barca side approaching something akin to complete football.

Verdict: Halftime-Fulltime Double- Barcelona/Barcelona 7/10
Lionel Messi will want to make up for lost time and help destroy Roma. I am expecting a 4-0 job. The great thing about Barca is the apparent lack of ego amongst their stars. This isn’t an episode of ‘Everybody Loves Ronaldo’, where the entire plot focuses on one individual. It’s more like an episode of ‘Friends’, where the players seem to have a genuine connection that manifests in a well-juggled ensemble, eschewing the concern of one individual.