The clear talking point that arises when one looks at this fixture is the presence of a certain Didier Drogba. The iconic Ivorian striker literally defined a generation at Chelsea with their epic European Cup campaign of 2012. The return of Jose Mourinho as Chelsea manager actually gives this tie a vaguely nostalgic appeal. Wesley Sneijder was a key figure in Mourinho’s historic victory with Inter Milan, adding extra intrigue to what is already looking to be a fascinating fixture in the combustible Turkish capital, Istanbul. 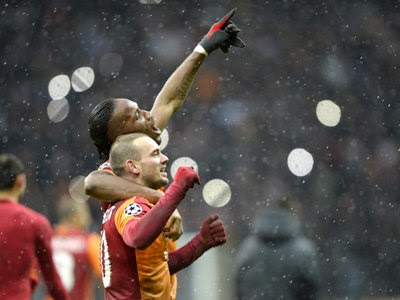 Galatasaray
Roberto Mancini’s men did the unthinkable, surviving a group with both Real Madrid and Juventus. They were aided by a truly abject showing by the Turin giants and will know that they need to get a result at home, with the Stamford Bridge fixture looming. Drogba, as always, will be the focal point and look to disrupt the solid defensive pairing of John Terry and Gary Cahill. Even in advancing age, the Ivorian can agitate defences with his bulldozer strength and deft lightness of touch.

Wesley Sneijder is the other obvious threat, with the ability to open up the game with rapier passing and natural footballing intuition. This game represents something of a blast from the past for fans of the Premier League, with former Arsenal stalwart Eboue likely to take part. Amrabat will look to take advantage of a midfield missing the cup-tied Matic, while Yilmaz will look to aid Drogba in the attacking third of the pitch.

We all know how naturally defensive Mancini is, from his time at both Inter and City. There is also a healthy rivalry between the managers that emanates from the Inter Milan managerial shifts. Galatasaray will probably look to play on the counter and hope to stifle the midfield running of both Hazard and Willian. But that will be easier said than done, with Chelsea under the tutelage of a European master. Chelsea showed grim determination to edge past Everton on the weekend, and they will be hoping for more of the same stout rigidity come Tuesday night. One major blow will be the likely exclusion of Oscar due to a knock he took on the weekend. They will also be without the services of Matic and Salah, whom are both cup-tied for the contest. This will likely see Lampard partner Ramires in the holding role, while Willian and Hazard will be joined by Andre Schurrle.

The threat of Drogba will certainly be there, but the deteriorating pace of both he and Sneijder should make it easier for the likes of Hazard and Ramires to contain. Eboue will look to get down Azpilicueta’s touchline as much as possible, but the athletic Spaniard has yet to indicate that he is actually a right full-back being played out of position, with a series of excellent performances that have kept Ashley Cole out of the side. The memory of that 6-0 home thrashing by Real Madrid will have greatly affected Istanbul’s legitimacy as a fortress venue, and Chelsea look to be a side in ascendancy at the moment.

VERDICT: Chelsea 19/20
You can expect a typically cagey opening period to the match, with both Mourinho and Mancini being noted for their tactical efficiency ahead of style and extravagance. Ramires will play a key role in driving the Blue machine forward, while Drogba parries and jousts in the penalty area. I just feel he will get isolated due to the midfield superiority of Chelsea, and Hazard will look to be at his dynamic best and completely obliterate Eboue’s flank. Chelsea should edge out a crucial win that will continue the trend of away teams winning their first legs.