Jose Mourinho’s side were, quite frankly, dismal, in a performance against Palace that served to validate every single self-effacing statement he has made about the London club’s title credentials. PSG had an altogether different weekend, practically ensuring the Ligue 1 championship with a roughly hewn victory over Nice. Laurent Blanc’s side have probably been one of the most dominant sides in this year’s competition, relying heavily on the scoring exploits of Zlatan Ibrahimovic. The enigmatic Swede resumes his similarly bizarre relationship with Jose Mourinho; the two seem to operate on a similar level of rarefied hubris, though there is a grudging respect between the two that makes for an interesting dynamic quite similar to the Drogba sideshow. This should be a cracking fixture that has many unknown variables that will only be made apparent on Wednesday night. 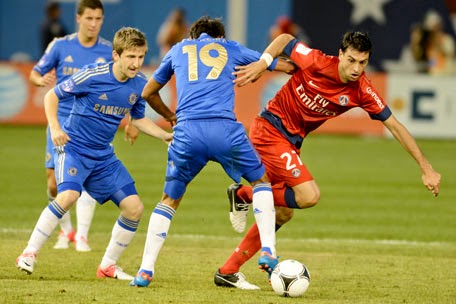 PSG
In this clash of ‘old’ vs ‘new’ financial investment, Qatar-based PSG are probably the slightly more buoyant side. Laurent Blanc has fashioned a powerful team built around the striking power of both Ibra and Cavani. To add even more gloss to proceedings, Chelsea have openly been attempting to court Edinson Cavani, while it is no secret that PSG are interested in both David Luiz and Eden Hazard. This could end up as the most hotly anticipated shopping venture in recent Champions League history. Lavezzi has been excellent on the wider role for PSG, while Thiago Silva is the bedrock of the French defence.

Silva will be reunited with many of his Brazilian teammates, perhaps giving him some insight into the possible attack patterns of Chelsea. Cabaye has settled in well at PSG and also brings in his own particular ideas to the machinations of the Chelsea side. He will likely partner Motta in the slightly deeper role, allowing Pastore to push up and support the front men. Ibra will be crucial in determining the result here. The Swede will receive fairly physical treatment from both Terry and Cahill and a season in Ligue A does not quite prepare a player for hardened Premier League opponents. Chelsea’s solid defence and tactical acuity will prove critical in how the teams line up at Stamford Bridge. Jose Mourinho’s love affair with this competition would reach its second honeymoon were he to orchestrate an unlikely European conquest in his first year back at the Bridge. Samuel Eto’o will return to the side and Oscar will also probably start to add some flair to the midfield area. Mourinho has tended to go for the Lampard-Ramires combination for the big ties, which should be no different here.  The battle between Ibra and John Terry will be one of the most enticing individual battles, going a long way to determining the overall picture of the game.

Eden Hazard is the wildcard in the pack, the one player in the Chelsea team capable of unlocking Pandora’s Box at any moment. All too often he seems overly burdened with making ‘jazz’ and kick starting the Chelsea machine. Oscar and Willian have to shoulder more responsibility and lend more creativity to Chelsea’s forward surges. Ramires will prove vital in nullifying Pastore and trying to pick up the dangerous Cabaye. Cabaye is highly influential when given space, similar in mould to Wesley Sneijder, but when denied space his mobility is exposed and he is far less dangerous. Chelsea are a team with an excellent European pedigree and know that the pressure is very much on PSG to get a positive result.

VERDICT: PSG 19/20
PSG will make it difficult for Chelsea to advance with a tough home victory. Ibra will be influential, but the wide play of Lavezzi and Cavani must not be underestimated. I expect Eto’o may possibly pinch an all-important away goal, while Chelsea are consistently threatening from set-piece scenarios.  This result should set up a fascinating return leg at the Bridge.