After an eventful season opener our attention now turns to South East Asia and the Sepang International Circuit where Mercedes will look to continue their dominance over the rest of the field. Will it be another Silver Arrows one-two or will the boys over at Ferrari and Williams have their say in the race result?

Previous Race
The first Grand Prix of the 2015 season will be remembered for the small field of drivers who managed to avoid injury, mechanical problems and crashing out to actually complete the Albert Park circuit. The fifteen car field that managed to make it to the starting grid was cut even further when Felipe Nasr tried to take advantage of an incident between Kimi Raikkonen and Carlos Sainz Junior in the first corner. In his haste to pick up a few spots, the would-be opportunist made contact with Pastor Maldonado whose Lotus went into a spin and ended up clattering into a barrier. There was no serious damage to Nasr’s car and he would go onto finish in an impressive fifth position. Maldonado was out however and would soon have teammate Romain Grosjean in the paddock to keep him company, a technical failure on the Frenchman’s car forcing him to retire before completing the first lap. The safety car was introduced as stewards cleared the track of debris. 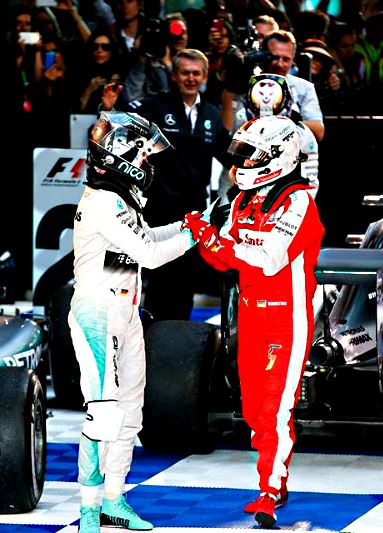 The restart under the safety car saw Nico Rosberg’s momentary lapse in concentration capitalised on by race leader Hamilton. The Brit would go on to finish the race 1.360 seconds in front of his Mercedes colleague and 34 seconds ahead of a rejuvenated Sebastian Vettel in third place. Although Williams were a driver down having lost Valtteri Bottas to a back injury, Felipe Massa’s fourth place ensured they would come away from Australia with a respectable twelve points. Further down the field Daniel Ricciardo took advantage of the final causality of the weekend, Kimi Raikkonen, whose late retirement allowed the hometown hero to claim sixth position. Raikkonen’s retirement was preceded by that of the sensational seventeen-year-old debutant Max Verstappen, whose promising race came to an unfortunate end when engine problems forced him to retire in the 32nd lap. The Force India team benefitted the most from the aforementioned retirees with Nico Hulkenberg claiming seventh and Sergio Perez sneaking into tenth place when the dust had settled. Marcus Ericsson and Carlos Sainz Junior finished in eighth and ninth respectively whilst eleventh-placed Jenson Button in a struggling McLaren was the only driver to complete the race and not score points.

Track
Situated some eighty kilometres from Kuala Lumpur’s city centre, the 5.543km long Sepang International Circuit is home to one of motorsport’s most intriguingly designed grandstands. The track’s two longest straights which are connected by a hairpin turn run parallel to this outlandish feat of architecture. In addition to the aforementioned high speed straights and hairpin turn, drivers will have to contend with six shorter straights and fourteen more corners. The two DRS zones are located at the pit straight and the final straight. In terms of weather conditions, temperatures in the low thirties are being predicted for race weekend, so to paraphrase Nick “Honey Badger” Cummins, drivers will be losing more fluid than a sauna full of gypsies with mortgages. Afternoon thunderstorms are also on the cards, so it’s likely the full wets will make an appearance at some point. Pirelli have nominated the orange hard tyre for this race due to the humidity and the bumpy nature of the surface which tends to destroy the softer tyres. Lewis Hamilton took pole at last year’s event followed by teammate Rosberg; the podium was rounded off by Sebastian Vettel, which was identical to last weekend’s result in Australia…bit of recurring theme isn’t it? VALUE BETS
Nico Rosberg – To Win Outright (18/10); Fastest Qualifier (15/10)
The German will be a tad annoyed with himself after letting his Mercedes compatriot get away from him in Australia. With Lewis Hamilton completely dominating last year’s race weekend in Malaysia by claiming pole in qualifying, setting the fastest lap time and winning the Grand Prix, Nico will have his work cut out for him if he wants to stop history repeating itself. His chances may come down to how he fares in qualifying. If he can take pole and make Hamilton chase, the Brit’s advantage in fuel conservation will be negated. With odds of 18/10 and 15/10 respectively there is a decent chance to make some money here. Nico has an advantage over the rest of the field when it comes to challenging Lewis, that advantage is that he’s also in an all-conquering Mercedes.

Felipe Massa – Podium Finish (9/4)
After missing out on a Top 3 finish last weekend the veteran Brazilian will want to be one of the drivers wasting good champagne when the Malaysian Grand Prix reaches its conclusion. We may see a repeat of last weekend’s straight shootout between himself and Sebastian Vettel for that final podium spot once again. There is a bit of a subplot to this one too, in the shape of Ferrari versus Williams and their battle for runners-up spot in the Constructors’ Championship.The fight for third is likely to provide the best entertainment value this coming weekend. I think the experienced Massa is in with a decent chance of beating the reinvigorated Vettel. At 9/4 Felipe offers great value for money.

Felipe Nasr – Top 6 Finish (8/1)
A fantastic drive in Australia saw the Sauber debutant claim fifth position and ten valuable points for his team. A bit of an unknown quantity before the season opener, the Brazilian youngster certainly got the F1 world’s attention at Albert Park. Nasr’s attempt to overtake two cars in turn one last weekend shows that he’s a gutsy character who drives on the edge. There is also a hint of fellow countrymen Felipe Massa to the way he drives. A solid performance in Australia will have the rookie buzzing and I would not be surprised if he repeats his Top 6 finish. With odds of 8/1, he’s my hope for a big earner this weekend. Nico Hulkenberg – Top 6 Finish (16/1)
Having gone through an extremely difficult preseason the Force India team will be delighted with their drivers both being amongst the points in Australia. Nico started the race thirteenth on the grid but managed to scythe his way through the ever decreasing field and eventually finish in seventh place, a few split seconds behind Aussie native Daniel Ricciardo. Although he could only manage seventh place at last year’s Malaysian GP Hulkenberg is still a good bet for a Top 6 finish. I honestly think he will go one better this year. At 16/1 he offers fantastic value for money.

Sebastian Vettel – Fastest Lap (12/1); Podium Finish (27/20)
A solid race in Australia by the four-time world champion means he goes into Malaysia bang on form and hungry to end the Mercedes juggernauts’ dominance. Although he struggled to keep up with the Silver Arrows at Albert Park, the Ferrari new boy did manage to set some blistering lap times. An outsider, but Vettel is capable of it especially considering Ferrari have had another week to work out some of the kinks in the car. He will be pushing that Ferrari to its breaking point. Vettel for fastest lap is my most risky bet for the week but one that offers big returns. He is also a decent option for a podium finish although I feel he may be knocked off it by a determined Felipe Massa.