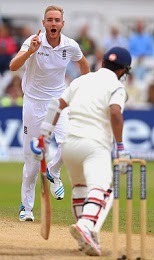 It was strange start to the Test series in Trent Bridge; in fact, that is a huge understatement. The match in Nottingham bordered on the bizarre. The surface had close to nothing for any of the bowlers and resulted in a drawn Test with only three innings completed. There were no delays for rain. The Trent Bridge Test was punctuated with records from lower-order batsmen, from Jimmy Anderson and Joe Root’s record tenth-wicket stand of 198 to the second-highest run tally in a Test by batsmen number nine to eleven, to Bhuvneshwar Kumar scoring two fifties from number nine and taking a five-for. Although neither side were able to take the game by the scruff of the neck, skittle their opponents and force a result, it must be said that, at times, both sides had the capacity to go belly-up and lose the Test completely. If the English pitches persist in this manner, the series will undoubtedly turn into a battle between the tactical decisions made by the two captains. England
What a difference a year makes in sport. This time last year, England hardly gave the Australians a sniff as they romped to a 3-0 home Ashes victory. Before that, Alastair Cook led his side to an historic Test series victory in India. Since, England were whitewashed on Australian soil and have failed to win a Test in eleven months, dropping a home series to Sri Lanka. Cook, not yet a 30-year-old and having scored 25 Test hundreds, is in the leanest patch of his career and has come under fire as a boring, predictable captain. In 2014, only Joe Root has managed to score consistent runs while England’s bowling attack has looked toothless and jaded. With the premature retirement of Graeme Swann, they have opted for Moeen Ali as the primary spinner despite him being a specialist batsmen. Kevin Pietersen was axed. It all just seems to have got away from the ECB and the England leadership and there is really no place to hide.

The side will be frustrated at the state of the pitches. A strength of their game prior to their visit to Australia was form at home, a place that assisted their seamers in getting movement in their air and off the pitch. Instead, they have been greeted by dry, dull and lifeless tracks that resemble the pitches found in their opposition’s backyard. News is not to expect much better from Lord’s, which will bother the English camp to no end. What use is home ground advantage if it works in contrast to your strengths? Also, with five Tests scheduled within six weeks, burnout is a worry for an English side who have recently concluded a series with Sri Lanka. James Anderson equalled Fred Trueman’s record of 229 wickets in England in his last outing, but there is no evidence that he will extend the record by much in these conditions. Simon Kerrigan has been included in the squad for Lord’s, an aggressive left-arm spinner who will look to exploit the dry track as much as possible. That is, unless he repeats his wretched England Test debut, which saw him clouted out of the attack by a belligerent Shane Watson, among others. It may also be high time for a change behind the stumps, Prior’s indiscretions becoming more and more frequent. For much of the first Test, MS Dhoni operated in complete contrast to his career as captain. India went into the match with only five specialist batsmen, Dhoni at six, for the first time in a series away from home. He scored 82 from the promoted role, was aggressive in the field and had England reduced to 202/7 in pursuit of 457. Then, on Day 4, he reverted back to his instincts and it all went awry. For the first session, he made it clear that Joe Root would not be targeted and instead gifted him singles to get James Anderson on strike. This is common among modern-day captains but not when the number eleven shows a propensity to score runs, not when the short ball fails to trouble him and not when it goes largely unsuccessful for the majority of a session. After lunch, the short ball plan was abandoned, Dhoni reverted to spin and in not much time, England were back in the dressing room. However, 198 runs had been scored and India were left with a deficit.

Cheteshwar Pujara lamented India’s inability to claim the tail-enders and it almost came back to bite them on the final morning. India suffered a major scare when they lost three wickets for seventeen runs and were faced with the prospect of batting out the day with the tail. They found an unlikely hero in Stuart Binny, who batted time with both Ravi Jadeja and Bhuvneshwar Kumar to ensure that India saved the match. Despite falling 22 runs short of a century on debut, Binny may find himself sidelined at Lord’s as India attempt to find the right balance in their side. One option is to replace Binny with Rohit Sharma, who is a vastly more accomplished batsmen and can add a few useful overs with the ball. However, Dhoni may revert to a more conventional Indian strategy of playing two spinners, both of which can bat a bit. It may necessitate the return of Ravi Ashwin, who has the potential to cause England a whole bunch of problems.

Venue
As stated, it is unlikely that the pitch at Lord’s will be what fans are used to. There are various schools of thought as to why English pitches have become low and slow, but the overarching theme is that they have. Having said that, the slope at Lord’s will always assist a cunning seamer. There are chances of rain throughout the weekend, while Sunday is likely to bring the heaviest downpour.

BEST: Top English 1st Innings Batsman, Joe Root 9/2
I’m surprised to see Joe Root at such a favourable price considering his overwhelming success at the ground. He scored a double century against Sri Lanka in his last time out; the time before that he scored 180 against Australia. He clearly loves the slope, ground and all it represents. I profited nicely backing him at 5/1 when he scored his double and I’m going to chance my arm on the young Englishman again.

VERDICT: Draw 11/10
It’s tough to find ways to justify anything other than a draw here. Both sides have attacks that are probably not good enough to claim twenty wickets unless conditions suit them, there seems a lot of rain around and a draw was played out here with Sri Lanka last month. It went down to the wire, but their were no breaks for rain, only slow over rates. Get on the draw and don’t look back.