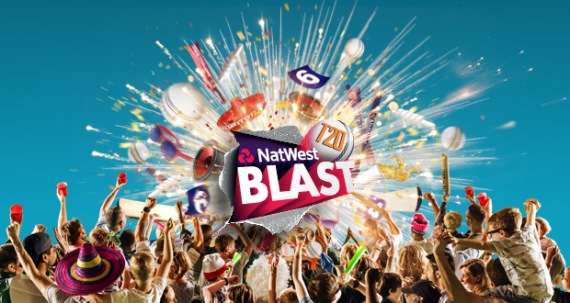 We’ve come to the business end of the Natwest T20 blast with just eight teams remaining in the competition.

The first two semi-finals will take place on Monday and Tuesday with Nottinghamshire taking on Essex after which Northants go head to head with Middlesex.

To Win Match
Nottinghamshire 6/10| Tie 35/1| Essex 13/10
We are finally coming to the end of what has been quite a long tournament which started all the way back in May. The quarter finals start on Monday evening and are to be contested by eight sides who all have something different to offer and deserve to be up there. Quarter Final 1 takes place at the world renowned Trent Bridge and finds Table topping North Group side Nottingham taking on Essex who managed to squeak into the playoffs by finishing fourth in the South Group.

Nottinghamshire
Notts are a side full of players who will be familiar to South African audiences and actually feature a strong African contingent. Michael Lumb has made England his home but was born in South Africa and has represented England at T20 and ODI level. Riki Wessels is the son of former Protea captain Kepler Wessels, Brendan Taylor recently retired from international cricket after leading Zimbabwe in the 2015 World Cup and Imran Tahir is currently the incumbent spinner in the Protea ODI and T20 sides. Along with these familiar names, Greg Smith is a county cricket veteran who has managed 214 runs this season at a good average, Dan Christian has played at the highest level for Australia and has 304 runs to his name in the tournament and Jake Ball recently made his England test debut as one of the main strike bowlers. Also involved are England ODI bowler Harry Gurney, Steven Mullaney and Samit Patel who has been capped at all levels for England.

Nottinghamshire bat fairly deep as former England gloveman Chris Read comes in at eight in the order. They do rely on the likes of Christian, Wessels, Lumb and Smith to get the runs and more than often they have obliged. Christian has been particularly impressive with his 304 runs coming at a strike rate of over 170 and an average over fifty. Wessels and Lumb are a powerful opening partnership who like to keep things moving and both score at rates of over 140. Bowling wise it is Gurney, who played the last of his ten ODI’s in 2014, who has been Nottingham’s main striking weapon. He has managed fourteen wickets in ten games at an average of just a shade over 20. Patel, the off spinner, has been their best bowler economically with his twelve wickets coming at just over six runs an over. Mullaney provides good support with his medium pace and has picked up ten wickets at an economy of just below eight an over.

Essex
Essex are a team with big names who have not quite performed to their full potential as is proven by their inconsistent group stage performances, winning seven and losing six of their matches. Some of the big names in their side include the South African born, former Dutch allrounder Ryan Ten Doeschate who has been ever present in county cricket for some time now, Ravi Bopara who is capped at all levels for England, big hitting Graham Napier who once played for Mumbai Indians and once hit 16 sixes in a single T20 innings, James Foster who has been capped at all levels by England but has not played at the highest level since 2009 and Jesse Ryder who is well known to South Africans through his New Zealand exploits.

Ashar Zaidi, a 35 year old batsman from Pakistan has scored 357 runs for Essex this season, usually batting at five or lower in the order he has an average of over 44 and a strike rate of over 165. He has also hit 22 sixes which means the Essex line-up is not short of impetus lower down the order. Further up the order, the likes of Ryder, Bopara, Dan Lawrence and Tom Westley look to get things off to a good start. Westley has been particularly impressive, scoring 395 runs in thirteen innings which has included only one fifty indicating that he usually gets a start which sets things up nicely for the rest of the order. Napier is someone who can also walk in anywhere in the order and completely change a game with his destructive strokeplay. Bowling wise, Napier has been the hero for Essex this season taking twenty wickets which puts him second on the overall list. New Zealander Matthew Quinn has taken sixteen wickets and Bopara and Lawrence have twenty wickets between them.

Verdict: Essex at 13/10
I’m going to go against the odds here and back Essex. Looking at their line-up I just think they have more players who can make an immediate impact. Players such as Napier, Ryder, Bopara and Zaidi will be well up for this game and can take the Nottinghamshire attack to the cleaners if they get properly stuck in. Notts will rely on Patel and Gurney to take wickets up front and subdue Essex’s middle order but if they fail to do so I can see a win for Essex unfolding.

To Win Match
Northants 9/10| Tie 35/1| Middlesex 9/10
Northants finished second to Nottinghamshire in the North Group while Middlesex finished third in the South Group and both sides won seven games in the group stage so this looks like it has the potential to be a tight affair.

Northants
Northants were struck a cruel blow when Richard Levi injured his shoulder in a game on the 22nd of July, ruling him out for the final two games of the group stage and it remains to be seen if he will make a return for the quarter final. Without Levi, Ben Duckett has had an amazing limited overs season, scoring 360 runs in the T20 Blast at an average of 45 and strike rate just below 140 and will look to lead the batting effort to a big total. Also in the batting mix are Josh Cobb who has managed 365 runs at an average of over 35 and has scored four half centuries, Adam Rossington who has managed 247 runs at a strike rate of over 145 and Alex Wakely who has been solid in the middle order. Bowling wise it will be the offspin of Graeme White and seam of Richard Gleeson who will look to strike early and pick up early wickets to expose the middle order of Middlesex. Sri Lankan Legspinner Seekkuge Prasanna will look to add to his ten wickets this season and South African Rory Kleinveldt is always a danger with ball in hand and can be a useful striker of the ball in the lower order.

Middlesex
Middlesex will look to the likes of Dawid Malan, John Simpson, Eoin Morgan, George Bailey, James Franklin, Stevie Eskinazi and Nick Gubbins to get them the solid total they will need to get a win over a strong Northants side. Malan has 368 runs in the tournament at an average of over 40 and will look to get his side off to a good start. George Bailey, the former Australia T20 and ODI captain, will need a good score in the middle order and captain Franklin will look to be explosive if he pushes himself up the order, which is likely. Morgan is also a dangerous batsmen and has found some good form by scoring 220 runs in his seven innings this season. Paul Stirling, the Irish opener will also be keen to get involved and be amongst the runs. Middlesex are not short of batsmen with international experience and will be banking on these players to set a big total. Looking at the bowlers Toby Rowland-Jones, who has recently been included in the England Test squad has taken fifteen  wickets this season at an impressive average and strike rate, will be looking to pair up with James Fuller from new Zealand who has taken fourteen scalps this season at an average just over 22. Australian Nathan Sowter, A legspinner from New South Wales has taken eleven wickets at an average of just under 21, will be looking to spin a web on the Northants batsmen.

Verdict: Northants at 9/10
Ben Duckett will be crucial in this game and he may be the difference between the two sides. He recently scored a double century for the England Lions against Sri Lanka A in a 50 over game and since then his lowest score has been 41. If he comes off Northants will be hard to stop. The likes of Cobb and Rossington are dangerous prospects as well and their bowling looks solid. The Middlesex top order is full of strong batsmen who are also known to be inconsistent and if their top order fails they do not have the strongest middle to lower order going around and I think this gives Northants the edge. Back them to win here.


Written by Dale Vos for @Hollywoodbets.