The 2015 Africa Cup of Nations qualifiers got underway last month with each team playing their first two group matches. Another two games will be played over the next week. In Group A, South Africa will travel to face Congo on Saturday and will then host them a few days later on Wednesday in Polokwane. Congo head the group with six points after beating Sudan and Nigeria, while South Africa lie second with four points after beating Sudan but drawing with Nigeria. There are seven groups in total with the top two teams from each group earning a spot in the showpiece set for January next year, while the hosts Morocco and the best third-placed team from all the groups will complete the sixteen nation tournament. 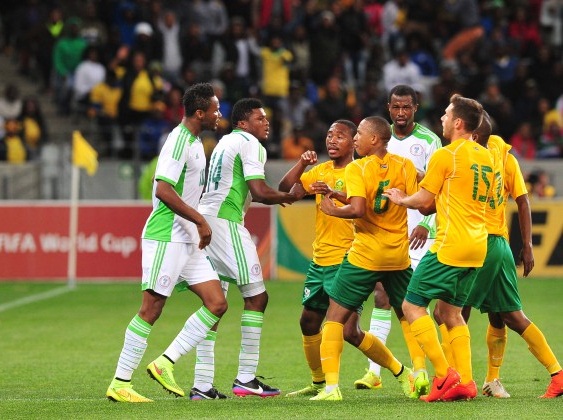 South Africa
South Africa opened a new era under coach Shakes Mashaba with a 3-0 win in Sudan. Second-half substitute Sibusiso Vilakazi scored a stunning brace to help Bafana get their qualifiers off to the perfect start. A difficult opening half made way for a totally dominant second as Vilakazi netted twice in six minutes, before debutant Bongani Ndulula applied the finishing touches with a third. Bafana then hosted African champions Nigeria and were unlucky to be held to a goalless draw in Cape Town. Lady luck was not on the side of Bafana Bafana, who desperately wanted a win for the first time in ten years against Nigeria. The hosts should have won the game had they converted the numerous chances they created, especially in the second half. The hard-working Bafana Bafana midfielders, Andile Jali and Dean Furman, were the standout performers with the likes of Oupa Manyisa and Tokelo Rantie troubling the Nigerian defence on many occasions.

Bafana will only leave for Congo on Thursday ahead of this crucial qualifier. It will give the side just one full day in the coastal city of Pointe-Noire and probably allow for a maximum of two training sessions for the team, with much of the week’s work being done at home. This match will be played on synthetic grass, so Mashaba has elected to hold his side’s training camp at the Royal Marang hotel and practice on a similar surface before the match. They should, at least, face nothing like the heat of Sudan with the weather forecast suggesting temperatures will be in the high 20s, with no rain. It will be warm, but not oppressively so. Mashaba has largely kept faith in the players from his first national squad by making only a few changes to the team. There were recalls for Thulani Serero (Ajax Amsterdam) and Reneilwe Letsholonyane (Kaizer Chiefs), while Tefu Mashamaite (Kaizer Chiefs) and Kwanda Mngonyama (Maritzburg United) were called up to bolster the defence. Young striker Fagrie Lakay (Santos) has been called up to the national squad where Shakes Mashaba has chosen five strikers. In-form forward Kermit Erasmus (Orlando Pirates) was also selected and could solve the problem of goalscoring that Bafana strikers have battled with in recent times. For Bafana, it is an infamous trip to Pointe-Noire, scene of one notorious visit for a World Cup qualifier in 1997, which they lost 2-0.

Former Bafana defender Mark Fish gave a taste of that visit when speaking of it. He suggested the players will have to front up mentally to the challenge. “The day before the game we pitched up at the stadium to train, and there were soldiers with machine guns who blocked our path on the field,” Fish said at the time. “One soldier actually cocked his gun and said in French something along the lines of we had better not go onto the field. This was ridiculous of course, as FIFA statutes state that both teams can train on the match pitch the day before the game. Dr (Irvin) Khoza was with us there as part of the SAFA delegation and he went up to this guy and basically just pushed him out of the way and told us to get on with it. It was a very brave move,” Fish said. “The game itself was brutal. I went off after I had my head opened up twice and also got a black eye. They were over-the-top physical and on that pitch, with that crowd, and the soldiers back with their machine guns lining the field, it was one of the most intimidating atmospheres imaginable. It’s a match I will remember to my dying day.”

Not much will have changed in the intervening seventeen years and those kinds of dirty tricks are likely to be repeated for Bafana on this occasion. It will be as much a mental test as a battle of ability on the pitch. But South Africa’s record in Pointe-Noire is actually quite good — apart from that defeat they have two wins and a draw, all in qualification matches. The last was in 2007, when Sibusiso Zuma scored as they played to a 1-1 draw on their way to the Nations Cup finals in Ghana the following year. Congo have lost there only once since 2001, though that is a statistic skewed by the fact that they moved away from the venue for a period to play in Brazzaville, before returning in the past three or four years. Overall, South Africa have met Republic of Congo on eight occasions and have four wins, three draws and that single defeat. The Congo squad includes 22 year-old Almeira striker Thievy Bifouma, whose double helped Congo stun Nigeria 3-2 in Calabar in their first qualifier earlier this month. Le Roy’s side then beat Sudan 2-0 at home and sit on top of Group A, with two games played, and a maximum six points. Twenty-five year-old Stade De Reims midfielder Prince Oniangue, who scored in both games, is also in the Congo-Brazzaville squad. Seven players from the squad come from local giants AC Leopards, who have proven a force to be reckoned with in CAF’s club competitions. They also possess more European pedigree, especially in the striking department, where players hail from the likes of Lille in France and Almeria in Spain.

VERDICT: Draw 9/4
Congo lie eleventh in the CAF rankings, three places above South Africa. They will be playing in a sold out stadium filled with passionate fans that normally results in them giving their all for the entire ninety minutes. It will be a hostile reception for Bafana and they could come away from this match happy with a point.