While other PSL clubs have gone on break, Orlando Pirates have been hard at work preparing for their CAF Confederation Cup clash against AS Kaloum of Guinea. The sides will contest the second leg of their play-off tie where the winner will proceed to the group stages of the tournament. Pirates will host the twelve-time Guinean league champions carrying a huge advantage after winning the first leg 2-0. The Buccaneers will be using the Bidvest Stadium as Orlando Stadium is currently undergoing “pitch maintenance”.

To Win (90mins) – Prices to be updated upon release
Orlando Pirates 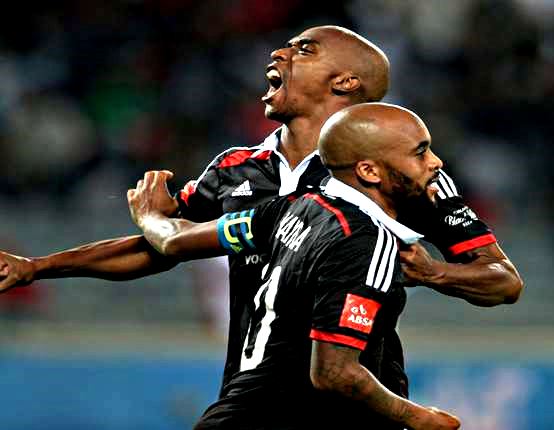 Orlando Pirates
As South Africa’s last remaining representatives in continental competition, Orlando Pirates carry the hopes of the entire country when they face AS Kaloum. The winner between the two sides will qualify for Group B of the Confederation Cup, where they will meet the victors of Leopards vs Wolves, Sfaxien vs ASEC Mimosa and Zamalek vs Balende. The Sea Robbers continued their impressive run in the continental competition with a 2-0 win over Kaloum in the reverse fixture.
The match was played at the Stade Modibo Keita in Mali last month as fears of the Ebola virus meant the home team had to play outside their country. Goals from Thamsanqa Gabuza in the first half and another from Oupa Manyisa with seventeen minutes remaining in the clash were enough to help the Soweto side to a comfortable scoreline in difficult conditions.

Gabuza opened the scoring for the visitors in the fifth minute. Lehlohonolo Majoro provided the pass for him to fire into an open net and take a 1-0 lead with the game still in its infancy. In the 73rd minute Manyisa made it 2-0 to Pirates. Manyisa was clinical with a volleyed shot which found the back of the net to give his side a commanding lead going into the final stages of the encounter. Lucky Lekgwathi, Thandani Ntshumayelo and Lennox Bacela have recovered from their respective injuries. Veteran defender Lekgwathi has not played all season due to various complaints, including an ankle problem. The 38-year-old, though, has resumed full training, and his experience in CAF competition will be crucial. Central midfielder Ntshumayelo was booked off for three weeks with a chest infection but has recovered, as is striker Bacela who was nursing an adductor strain.

The Buccaneers are hoping to make up for a disappointing domestic season after finishing fourth in the ABSA Premiership, nineteen points behind their rivals Kaizer Chiefs. The Sea Robbers will be hoping to replicate their form from previous rounds, having beaten Uganda Revenue Authority 4-3 and CF Mounana 5-2 on aggregate in the preliminary stages. Striker Kermit Erasmus should return to the starting lineup after Eric Tinkler tried the combination of Gabuza and Majoro in the first leg. Erasmus finished the South African season as the top scorer in all competitions with fifteen goals. The speedy forward pipped Free State Stars striker and ABSA Premiership Golden Boot winner Moeketsi Sekola following his hat-trick against CF Mounana of Gabon. AS Kaloum coach Aly Toure has warned Orlando Pirates the pressure is now off his side and to expect a much-improved performance in the second leg. “There will be less pressure on the team in the second leg because we have nothing to lose. This defeat can free the kids and push them to excel in the second leg,” Toure said. He also lamented his side’s luck in the first leg, suggesting Pirates had scored with only a few chances, while his side missed plenty. “We made too many mistakes, especially in the opposition box. We got a dozen clear chances, against only two for the South Africans. It’s frustrating, but at this level of competition these are errors you cannot make.”

Kaloum are based in the capital of Conakry and although they were formed in 1958, it is only in the 1980s where they emerged as a force in their country. They have won twelve league titles but last season’s triumph was their first in seven years. They dropped into the Confederation Cup after losing to Algerian side USM Alger in the last round of the Champions League competition, having seen off Sewe Sports of Ivory Coast and Zesco United of Zambia in the earlier rounds. All this while being forced to play their home games at neutral venues because of the Ebola virus. However, they fired coach Francois Zahoui once they were dumped out of the Champions League and the new man at the helm is still finding his feet. Zahoui only joined Kaloum in February, after leading Cote d’Ivoire to the final of the 2012 Africa Cup of Nations in Gabon and Equatorial Guinea. Kaloum are currently third in their domestic league, eight points behind the leaders, who have played two games more. They have been struggling to score goals having netted only nine times in eleven games. Their defence, however, has the best record in the league with just three goals conceded.

VERDICT: Orlando Pirates
After winning the first leg 2-0, Pirates come into their home leg as firm favourites. Kaloum’s problem in front of goal is likely to continue as the Pirates defence should be more difficult to break down than any of the opponents they have faced in the Guinean league. Pirates are yet to lose in their four African matches thus far and they should be backed for their third victory here.