It’s FA Cup time, with both semi-finals set for Wembley this weekend. Arsenal will face holders Wigan Athletic on Saturday, while Hull City will take on Sheffield United on Sunday. The Gunners will visit the ‘new’ Wembley for the third time, having lost their two previous visits to the stadium since it re-opened in 2007. They last played there in 2011, losing the League Cup final 2-1 to Birmingham City, and before that they also went down 2-1 to eventual winners Chelsea in the 2009 FA Cup semi-final. The last piece of silverware that Arsene Wenger’s side won was the FA Cup back in 2005, when they defeated Manchester United after penalties. Wigan Athletic
A run of just one defeat in all competitions since the 11th of February has seen Wigan muscle their way into the play-off places of the Championship and the semi-finals of the FA Cup. Wigan followed up their final victory over Manchester City last year by stunning Manuel Pellegrini’s side 2-1 at the Etihad Stadium in the quarter-final at the beginning of last month. There is a real belief among the fans at the DW Stadium that the club can make an immediate return to the Premier League this season. Their bandwagon went rolling on last weekend, with the play-offs seemingly a certainty after beating Leeds United 1-0 at home. Wigan, who have lost once in thirteen matches, were probably worth their win, but it was clear that the midweek draw with log leaders Leicester City had taken something out of them. The Latics occupy fifth place in the Championship, four points above the sixth place and last promotion play-off spot. They eliminated Premier League sides Cardiff City and Crystal Palace en route to the semi-final, while had a tough match with lower side Milton Keynes Dons in their first fixture.

Arsenal
It’s nine years since Arsenal won a trophy so it’s no surprise the Gunners are trying to gain any advantage possible for the FA Cup semi-final against Wigan. But an idea the club have come up with for this match is aimed at the fans and not the players. They have set aside two blocks of the stadium to create a singing area where “like-minded fans” can congregate and the club hope that this will spur the team onto victory. The scheme is in conjunction with fans’ group RedAction. While these supporters will be in full voice they will be hoping the players do not hit a bum note at Wembley. The Gunners’ hopes of UEFA Champions League football next season could be slipping away after losing 3-0 to Everton at Goodison Park. The Merseysiders moved within a point of the fourth-placed Gunners, with a game in hand. Arsenal appeared punch-drunk and looked to their manager to change the tide of the game. Wenger, however, could do nothing as his team were second-best in every area of the pitch by a long margin. 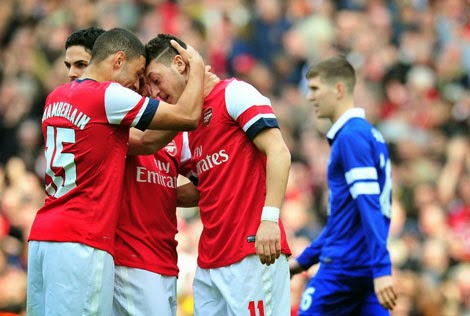 Regardless of who Arsenal are playing against, they will always be at a disadvantage when Mikel Arteta and Mathieu Flamini play together in central midfield. The defensive-minded pairing are slow to react to second-balls and need to receive the ball in plenty of space. They were exposed against the Toffees. However, Arsenal will be handed a much needed boost in star midfielder Aaron Ramsey’s return from injury. Ramsey made a substitute appearance in the defeat to Everton having not played since the Boxing Day victory at West Ham United, in which he damaged a thigh muscle. Ramsey was arguably the Premier League’s best player over the first half of the season, with thirteen goals for Arsenal and a series of driving performances, and his absence hit the club hard. Arsenal have been superb so far in the FA Cup. They started the tournament with a 2-0 win over their North London rivals Tottenham and went on to beat Coventry City 4-0 at the Emirates. They were pitted against Liverpool in the Fifth Round and managed a hard-fought 2-1 win. They then earned their spot in the semi-final with a 4-1 home win over Everton.

VERDICT: Arsenal 9/20
These sides have met twenty times with Wigan winning just three matches to Arsenal’s fifteen. All those games were played during Wigan’s time in the Premier League, when they had more resources and so-called bigger name players. With Arsenal winless in their last four league games they will be eager to redeem themselves in the Cup and should beat their Championship opponents.

Bet on this match now at Hollywoodbets.net! Haven’t got an account? Open one here now.
Related Topics2014Aaron RamseyArsenalbetbettingChampionshipEPLFA CupfootballGunnersLaticsOddspickspredictionpreviewsemi-finaltipsWigan Athletic