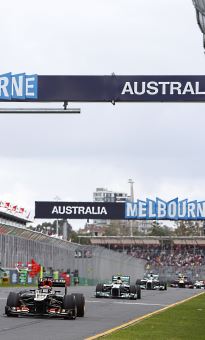 I often find myself losing track of time come the end of the working week. Saturday and Sunday tend to mould into one joyous blob of braais and long lie-ins and for the past three months, Derek Watts and his Carte Blanche crew have alerted me to the fact that the weekend was over. However, come this Sunday I will have a new reminder, which comes with its own V6 turbocharged alarm tone. The exquisite Albert Park will be the first port of call for the travelling F1 roadshow. Nico Rosberg took the chequered flag here last year, followed by Daniel Ricciardo and Kevin Magnussen. There was an upset late in the day with local boy Ricciardo being disqualified which saw third-place rookie Magnussen pushed up to second and the podium places rounded out by Jenson Button. We could be in for more drama this year with weather conditions said to be less than ideal for Sunday’s showpiece event. The race may be a bit too early to crack open a cold Fosters and throw a shrimp on the ‘barbie’ like our Aussie counterparts. But make sure you’re up in time, hopefully with a cup of coffee in hand and if your Sheila is kind enough, a full English breakfast in front of you. 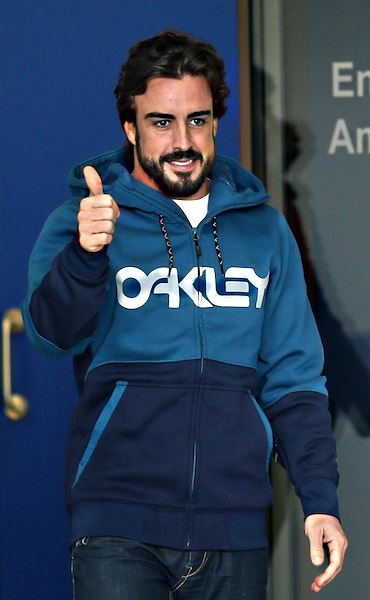 The big story to come out of pre-season testing is that Fernando Alonso will be out of action this weekend. A statement released by his McLaren team a few days after the incident seemed to indicate it was only a mild concussion and that he’d be on the starting grid but after consulting a specialist it was decided that it would be in his best interest to give the opener a miss. He will be replaced by McLaren reserve driver Kevin Magnussen who was so impressive at Albert Park last year. Unsurprisingly, Mercedes set the quickest lap time over the eight combined days, with Nico Rosberg recording a blistering 1.22.792 whilst running soft tyres, followed by Williams driver Valtteri Bottas who was running on super softs but still ended up some 0.271 seconds slower than the Mercedes man. There was good news for Ferrari with Kimi Raikkonen setting the third-fastest lap time; they will be hoping that this is not just another one hit wonder from Kimi and that he can rediscover some of that form that made him a double World Champion. Felipe Nasr was definitely the surprise package of the testing period, setting the fourth quickest lap in his Sauber. There are still some teams who could use a few weeks out on the testing track, particularly Force India who had a real torrid time in Spain, however testing isn’t always a sure-fire indicator that all is lost. The real test is on Sunday.

Track
The 5.303km long track which encircles the man-made Albert Park Lake has been a mainstay on the F1 calendar for the past nineteen years. Although only a temporary track it is considered to be the smoothest of all the road circuits due to the revamp it underwent in 1996. A firm favourite amongst fans and drivers alike due to its quickness, the Melbourne situated track lacks true straights so the DRS zones situated along the pit straight and between turns two and three may be of vital importance during the race. With the Australian weather service forecasting thundershowers on Sunday coupled with the close proximity of the barriers to the track, it is likely that the virtual safety car will make its first appearance at some point in the race. Pirelli have been proactive in preparing for variable race conditions and have given the teams the option of the soft tyre as well as the ever-present mediums. Although the Mercedes team will be hot favourites this weekend no constructor has managed to win back-to-back Aussie Grand Prix events since Renault achieved the feat in 2005 and 2006. In fact, the last nine races held at Albert Park have seen nine different constructors emerge victorious. With all of these statistical quirks as well as the different weather permutations this promises to be an absolute cracker of a race. VALUE BETS
Daniil Kvyat – Fastest in Practice One (50/1); Fastest Qualifier (100/1)
Look, both bets are well inside the realm of long-shot territory but with the young Russian looking to impress on his Red Bull debut I wouldn’t rule out the improbable occurring. After setting some scintillating qualifying times behind the wheel of a Toro Rosso last year, Red Bull’s latest prodigy will be looking to push his new toy to its absolute limit come race weekend. Last year the untested rookie pulled off a shock at Albert Park, making it all the way to Q3 in what was a rather limited car. It will be fascinating to see what he is capable of producing behind the wheel of the more powerful and aerodynamically sound Red Bull RB-11. There may be a large windfall for those brave enough to stick their necks out and back the rookie driver, especially considering all the drama and unpredictability that goes along with the first race weekend of the year.

Nico Hulkenberg – Top 6 Finish (7/1)
Last year’s season opener was a tremendous success for the 27-year-old German. He managed to secure an impressive seventh-place in qualifying and went on to hold that spot once the main race had concluded. He was later promoted to sixth as a result of Daniel Ricciardo’s disqualification. Although pre-season testing was anything but positive for the Force India team, they will be comforted by the knowledge that there are other teams who are also coming into Melbourne on the back of poor testing displays. It is a bit of a risk considering the car’s poor performance of late, but at 7/1 and with a driver who seems to be reaching his peak it’s one worth taking.


Grid Position of Winner – 2ND  Place (9/4)
The most likely outcome of qualifying is for the Silver Arrows to hold the front row of the grid, so if Lewis Hamilton qualifies on pole he will most likely have Nico on his tail from the start and vice versa. Both of the Mercedes drivers are unbelievably good off the starting line so positions may change as early as the first corner.
Considering Mercedes have the two best drivers in the field as well as the quickest cars on show this scenario is more than likely to play out and with odds of 9/4 it’s a decent opportunity to make a good return.

Fastest Qualifier: Daniel Ricciardo 66/1
The animated young Aussie will be looking to put things right after being disqualified at last year’s Grand Prix. Having finished in second-place he was later removed from the race results due to exceeding the fuel mass flow of 100 kilograms per hour. Ricciardo qualified second last year and gave Lewis Hamilton a real run for his eventual pole position on the grid. Daniel is now the senior driver at Red Bull and will want to make a statement and with his home crowd behind him a podium finish is more than likely. Although I fully expect one of the Mercedes boys to take pole in qualifying, Ricciardo is certainly capable of producing an upset and with the odds sitting at 66/1 it’s definitely worth an outside punt. To Win Outright: Sebastian Vettel 12/1
The four-time world champ will want to put his miserable 2014 behind him and what better way to do that than start 2015 with a win. He is coming off the back of impressive pre-season testing performances and looks more focused than Bernie Ecclestone staring at the legs of a scantily clad paddock girl. With Sebastian seemingly in sync with his Ferrari SF-15T a surprise result could be on the cards. The Ferrari team would be overjoyed with a podium finish; the German, however, probably has his eyes on a win and the statement that would make to his former employers at Red Bull. I honestly fancy the talented German to do something special this weekend and at 12/1 for a win I will definitely be putting some money on it. He will need to be at his absolute best in order to beat Rosberg and Hamilton, but we all know the four-time World Champion is certainly capable of pulling off the perfect race.