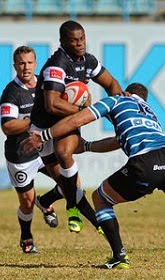 It was a relatively tame opening round last week, with only one noticeable upset as the Pumas marked their return to the big stage with a well deserved home victory over an unsettled Cheetahs side. The most impressive victory of the first round most certainly belongs to the Lions, who pummelled their northern neighbours 41-13, a result that postulates a seismic power shift in the age-old cross-Jukskei feud. Last year’s losing finalists Western Province pulled off a gallant second half performance in their showdown with the Kings in Port Elizabeth, making up for their crippling mediocrity in the first forty, and bouncing back from a point down at the break to finish nineteen points in the lead, claiming a coveted bonus point on the way. The Sharks were made to work perhaps a little too hard for their 31-24 victory over Griquas, considering their opponents were a man down for much of the game, but I suppose any win on the barren battle grounds of Kimberley should be considered a commendable achievement in this competition.

Sharks vs Pumas | Friday 15 August | Kings Park | 19:10
The Pumas head for the east coast optimistically seeking their second big union scalp in as many weeks. Sharks coach Brad McLeod-Henderson has decided against throwing sensational playmaker Pat Lambie straight back into his run on side for Friday night’s clash with the Pumas, preferring to use the returning Springbok off the bench with Fred Zeilinga retaining the number ten jersey after an impressive performance last week. JC Astle is rewarded for his solid performance off the bench with a starting spot in the second row alongside Marco Wentzel. Pumas coach Jimmy Stonehouse has made just one change to the run on side that wrestled its way to seven point victory over the Cheetahs in Mbombela last week, with the aptly named Giant Mutyanda taking over in the second row from Marius Coetzer, who falls to the bench.

VERDICT: Pumas (+13.5) 9/10
The Pumas head for Durban brimming with confidence and eager to prove that last week’s victory over the Cheetahs was no fluke. And while the Sharks managed a convincing win over the hardened Griquas in Kimberley, the fact that they failed to cross for the fourth bonus-point-awarding try, despite playing against fourteen men for most the game, makes it difficult to envisage a situation this week where they are able to outscore the visitors by more than two converted tries. The Sharks should win, but the Pumas will make them work for it.

Western Province vs Blue Bulls | Saturday 16 August | Newlands | 14:00
Western Province return home with maximum points from the opening round of clashes, and they’ll be eyeing more of the same this week as a dejected Bulls side limps into Newlands. In a rare occurrence, Western Province coach Allister Coetzee finds himself spoilt for choice with regards to selection as Rynhardt Elstadt, Scarra Ntubeni, Brok Harris, Kurt Coleman and Jaco Taute are all fit and ready for action. Coetzee is unlikely to make too many changes to bonus-point securing side from last week, so I expect most of these big names will make their appearances off the bench this week. Bulls coach Frans Ludeke has made just two changes to his pack following his side’s humiliating loss to the Lions last week. Jacques du Plessis returns from injury to start on the flank, with Jono Ross shifting to eight, forcing Jacques Engelbrecht down to the bench. Up front the injured bruiser Dean Greyling is replaced at loosehead by Marcel van der Merwe.

VERDICT: Western Province (-9.5) 9/10
If Province can start this game in the same way they ended their last, with the addition of all that explosive talent to the bench, they’ll have the game wrapped up before they break for oranges.

Golden Lions vs Eastern Province Kings | Saturday 16 August | Ellis Park | 14:30
The Lions have taken an unfamiliar seat up front in this year’s title race and will welcome the opportunity to tighten their grip on the lead by punishing the side that had them cast into the Super Rugby wilderness last year. Kings coach Carlos Spencer has written off his side’s opening round defeat to Province as nothing more than “first game jitters”, and has opted to name an unchanged starting XV for this weekend’s clash in Johannesburg. Spencer has made one change to his bench, with ex-Sharks lock Steven Sykes returning to action after a couple of months off. The Lions suffered a major blow this week as three players have been ruled out for the remainder of the competition. The most devastating loss is certainly that of dynamic playmaker Marnitz Boshoff, who will be unavailable for the next twelve weeks after fracturing his arm in last week’s 41-13 victory over the Bulls.

VERDICT: Kings (+19.5) 9/10
The Kings had Province on the back foot for most of the first half last week and will be eager to right the wrongs of their dismal second half showing when they run out at Ellis Park this weekend. I can’t see the Kings coming away from the Highveld with a win, but the Lions will be a far tamer beast without their roaring number ten Marnitz Boshoff, and so the visitors should be able to remain within the 19.5 handicap.

Free State Cheetahs vs Griquas | Saturday 16 August | Free State Stadium | 15:00
It is a battle of the beleaguered down in Bloemfontein this Saturday with both sides looking to bounce back from their less than inspiring opening round performances. Fresh-faced Cheetahs coach Rory Duncan, desperate to bounce back from last week’s harrowing defeat to the Pumas, has thrown his returning talent straight into the run on side for this week’s clash with Griquas. Jean Cook takes over on flank from Neil Claassen who drops to the bench, and pivot Elgar Watts takes over control of the attack from Willie du Plessis. In a surprising turn of events, Griquas centre Jonathan Franke has been cleared to play after picking up a match losing red card in the early stages of last week’s clash with the Sharks, but will understandably start on the bench this Saturday.

VERDICT: Griquas (+7.5) 9/10
The experimental set-up at the Cheetahs camp will take a few rounds to settle down, so the more settled Griquas side have the perfect opportunity to pick up those rare away points this week, even more so if they manage to keep a full complement of staff for the entire job. But the Cheetahs can be a defiant bunch in front of a home crowd so it only seems prudent to take Griquas on the +7.5 paying 9/10.