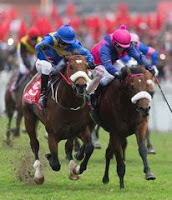 Winning Form brings you their best tips for Greyville’s racing on Vodacom Durban July day on Saturday the 4th of July 2015. Comments, betting and images are provided for all the big races! Tips provided come from Winning Form, as well as their back page tipster – Magic Tips by eMeM.

FIREWOOD is a smart three-year old with promising form and he has already tasted success on this surface. He stayed on for a close 3rd over a mile on the grass last time and thrashed older rivals over this c & d, prior to that. The son of Horse Chestnut should easily handle this slight rise in class and he has lots of scope for improvement. The Drier inmate jumps from a handy draw and should go very well in this competitive opening affair.

HEART OF A LION has produced some top class displays in recent staying features and he has struck up an excellent partnership with Muzi Yeni. He finished well for 3rd, beaten just under two lengths behind SOLID SPEED in a Grade 3 over 2400m last time but is now 2.5kgs better off with his conqueror and more importantly he proved himself over ground when staying for to place over two miles on the Highveld in his penultimate start. The Seul Amour gelding is weighted to go very close in this field.

ALMASHOOQA is a very smart sort in the making and the blinkers could make a significant difference to the imported daughter of Bernardini. She fought hard when beaten close-up in a three-way tussle, that included LAUDERDALE in a feature over this c & d, four weeks ago. The Mike de Kock inmate will now be cherry-ripe on her third run after the rest and she has cracked a good draw once again. She has lots of scope for improvement and should go very close in this line-up.

The betting market suggests otherwise but the country’s most prestigious race is wide open and an upset could be on the cards. That said, this time there won’t be a farcical pace of twelve months ago but another thrilling spectacle is on the cards. With just a trio of fillies entered, all of which are three-year olds, their task does seem a tall order but PINE PRINCESS could raise the flag first for the fairer sex. The Mike de Kock inmate has always given the indication that she could love racing over ground and it came as no surprise when she produced a brilliant effort to win the Oaks on the Highveld. However, the manner of victory was superb for she quickened effortlessly a long way out before fighting on courageously in the closing stages. She did things the hard way when collared late in another Grade 1 on this track last time but will enjoy having a lead today and should make her 52.5kgs and good draw count.

LEGAL EAGLE will be the most talked about runner & a deserved favourite. He has been brilliant over the past few months and he crushed older rivals in the Jubilee in Gauteng

BELONG TO ME showed exactly what he is capable of when he kept on well to beat a fast finishing EQUITY KICKER over 1100m on this track, four weeks ago. There was plenty of merit in that victory as this son of Antonius Pius was drawn widest of eight and he is well handicapped here. He has no issues with the extra 100m and his pole barrier position, coupled with Anton Marcus in the saddle, makes him a huge contender.