Formula One’s three week sabbatical has finally come to a conclusion and normal racing service will return to jubilant F1 petrol-heads’ television sets across the world. The three week break has given the constructor’s engineers and mechanics time to tinker with the cars. The question now is who will benefit the most from the upgrades made during the break as the teams head for European shores. 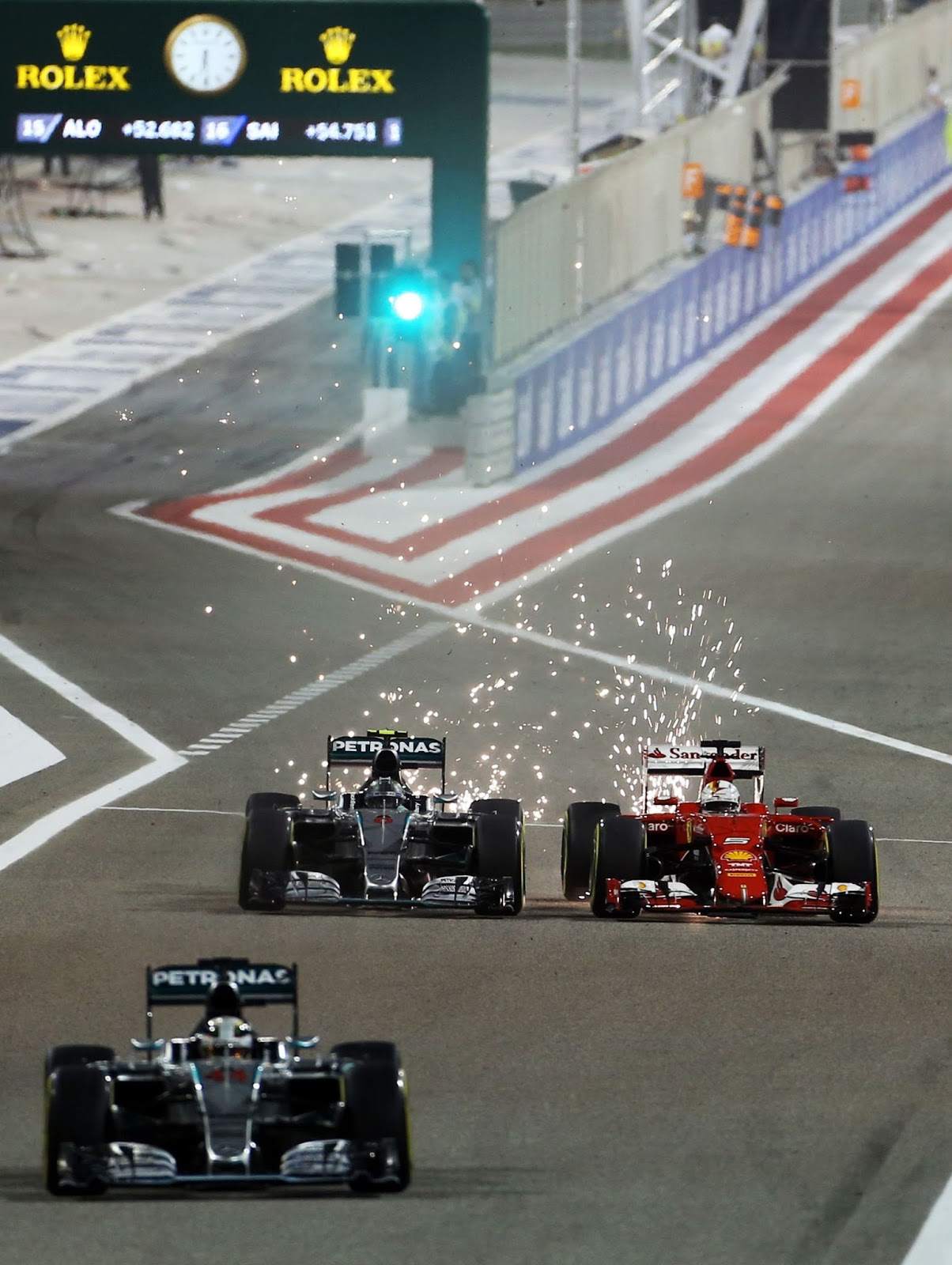 This was definitely the most exciting race of the season so far. It was packed with engrossing racing and more drama than an episode of Egoli. Even before the start lights went off in Bahrain there was action; Felipe Massa couldn’t get his car off the grid for the formation lap so he was forced to start from the pit lane, Pastor Maldonado proved he has a sense of direction to rival that of Top Gear presenter James May, with the Venezuelan somehow managing to park his car in the wrong spot on the grid. Sadly, Jenson Button was unable to make it off the starting line; issues with his McLaren-Honda meant he watched the race from the paddocks. The race finally got under way with a frenetic start and the pace wasn’t to let up throughout the contest. Overtaking manoeuvres in the first few corners, undercut strategies from Ferrari that worked like a charm until Vettel made his second of two errors and mini races going on all around the circuit.

Kvyat eventually finished in ninth whilst Massa would go on to take tenth. Further up the field, Daniel Ricciardo secured sixth spot although a spectacular engine failure on the final straight of the final lap saw him crawl over the line. Grosjean opened up a lead over Force India’s Sergio Perez and the two would go on to finish in seventh and eighth place respectively. With the race drawing to an end all the action was happening at the front of the field. Vettel was trying to catch up to the Williams of Bottas but his attempt was to be for nought as Valtteri hung on to claim fourth whilst Seb had to settle for fifth. Kimi was flying in third; he had just set the fastest lap of the Grand Prix and was narrowing the gap between himself and Nico Rosberg with every passing lap. The Mercedes duo began to struggle with their braking system going into the final ten laps. Rosberg would eventually suffer at the hands of his failing brakes when he over broke into turn one on lap 56, allowing Raikkonen to steal second place. Lewis Hamilton was also struggling but because of the massive lead he built up, was able to nurse his car to the finish line in the position he started the race in. When all was said and done Hamilton had emerged victorious and was joined on the podium by Raikkonen and Rosberg.

Track
Built in 1991, Circuit de Barcelona-Catalunya hosted its inaugural race that same year and has been a mainstay on the F1 circuit ever since.  The track consists of 66 laps covering a total race distance of 307km. Kimi Raikonnen still holds the lap record with his 1.21.670 assault on the 4.665km lap set during his 2008 victory. The circuit is made up of a combination of sixteen high and low speed corners; amongst these hides one of the most intriguing and challenging hairpins on the F1 calendar, namely la Caixa, which was narrowed in 2004.  One of the track’s two DRS zones is located between turns nine and ten whilst the other is situated on the final straight. The bumpy track surface means tyre degradation will be an issue; Pirelli have elected to issue the orange hards and white mediums for this weekend. Although the teams and drivers know the ins and outs of the track due to the eight days of preseason testing they did earlier in the year the varying crosswinds still make it a challenge to get the cars ideally setup. The weather forecast for this weekend in Barcelona is predicting clear skies with wind speeds between 15 and 25km per hour. Last year’s race saw Lewis Hamilton finish in first spot followed by teammate Nico Rosberg and the podium was rounded out by Daniel Ricciardo. VALUE BETS
Sebastian Vettel – To Win Outright (7/1)
The German’s campaign to usurp Lewis Hamilton was dealt a blow in the Bahrainian desert three weeks ago. A momentary lapse in concentration just as the race was starting to get interesting saw Ferrari’s new poster boy drop valuable points in his quest to reclaim the Drivers’ Title. He will want to make amends for his error this coming weekend in Spain. The Circuit de Barcelona-Catalunya has been one of Ferrari’s favourite stomping grounds – the team have won a total of twelve races there since its debut on the F1 calendar in 1991. The heir apparent to Michael Schumacher’s throne at the Prancing Stag will have to do a lot to beat his idol’s record at the track, but with one in the bag from his Red Bull days Vettel may well edge closer to eclipsing Schumacher’s record six race wins. By the end of the race weekend I think Sebastian will only need another four wins on Spanish soil to draw level with the legend, and with odds of 7/1 on offer from the bookies, a great return may be in store for those who back the German.

Kimi Raikkonen – Podium Finish (13/20); Fastest Lap (11/2)
I had been backing Kimi to get on the podium for a while and he finally came through in Bahrain. The flying Finn lived up to his alias last time out by not only claiming second place but also producing the fastest lap of the day, and in the process ensured Ferrari emerged from the Western shores of the Persian Gulf with a respectable points haul. We may be in for a repeat performance from the one worded response specialist in Spain’s second city this weekend. Catalunya is a track the Ferrari man enjoys; he won the 2008 edition of the Grand Prix whilst in his first stint at the Prancing Stag. His 1.21.670 second blitzkrieg on one of laps in his 2008 victory is still the track’s lap record. When all is said and done I fancy the Finn to have another podium and fastest lap under his belt.

Romain Grosjean – Top 6 Finish (9/4)
Romain Grosjean’s seventh place finish in Bahrain saw him fall agonisingly short of the coveted top six for the second race in a row. The Frenchmen has been putting in some fine displays behind the wheel of his Lotus recently and will want to build on this momentum in the capital city of Catalonia. His performance in last year’s edition of the Spanish Grand Prix yielded an eighth place finish. Although the Lotus man’s race weekends seem to culminate in him finishing just outside the top six more often than not; I think he will be a real threat to Daniel Ricciardo and the Williams duo of Massa and Bottas and their strangle hold on the last few top six places as we move into the European legs of the F1 calendar. This could well be a pay day for those willing to stick their neck out and back the in-form Frenchman. Lewis Hamilton – Fastest Qualifier (7/20)
The Brit had a good race weekend out in Bahrain where he once again qualified on pole and dominated race day. It could have been so different, however, with both him and his Silver Arrows team mate experiencing difficulties with their braking systems in the final few laps. Nico was to pay the price for this and lose his second spot whilst Lewis got lucky in the end as he managed to limp over the line ahead of Raikkonen. Although the Ferrari team will be hoping for more issues over at Mercedes, I can’t see Lewis having any difficulties setting the quickest qualifying time and making it five poles in five races. 7/20 may not be the biggest price on offer but it’s the closest to a sure thing you’ll find in Formula One.