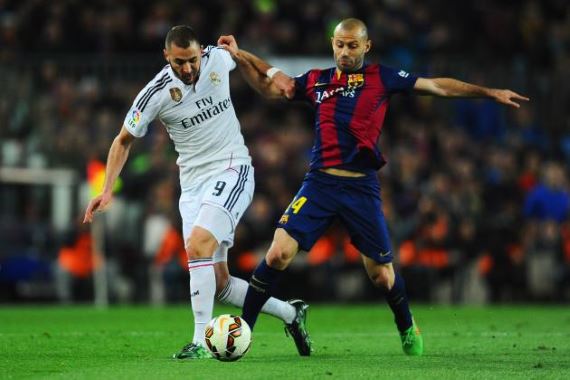 Spain will come to a standstill on Saturday night as the country’s biggest clubs, Real Madrid and Barcelona will clash in a potential season-defining El Clasico. The array of attacking prowess and creative talent that will take to the pitch is phenomenal and the skill set to be showcased will be nothing less than superb. Los Blancos will be hoping to bounce back from their 3-2 defeat at Sevilla last time out, while the Catalans will look to make it four successive wins. Barca are top of the La Liga standings on 27 points while Madrid are three points behind them in second place with a better goal difference. Real Madrid
Real Madrid were handed their first defeat of the season as they went down 3-2 away to Sevilla before the international break. Los Blancos will be desperate to return to winning ways and claim bragging rights against their bitter rivals. Madrid will be happy to return to the Santiago Bernabeu where they have hit top gear this season.

Los Blancos are unbeaten on their turf with four wins from five matches and have scored 12 goals while conceding just once. Madrid ousted Barcelona 3-1 in this fixture last season and will be hoping to replicate that performance.

The game will mark the first ever Clasico of Real Madrid manager Rafael Benitez’s career. Having ventured through various clubs across Europe, Benitez has finally returned home, where he started his career with Real Madrid B. The Clasico will be of significance to Benitez, due to the importance of the result which will have a direct implication on the title race, as well as the fact that Benitez is yet to win the trust of the Bernabeu faithful.

Los Blancos haven’t won the La Liga title since the 2011/12 campaign under the guidance of Jose Mourinho. Since then Barcelona have claimed two league titles and even local rivals Atletico have managed to win the league. Benitez will be hopeful of bringing the La Liga title back to Madrid at the end of the season and a win over the reigning champions will be crucial to their chances.

Benitez’s mind will be in overdrive as he looks for the best way to beat last season’s treble winners. The stakes are high – as they always are. Madrid’s clashes with Barcelona are the biggest in the world, but this time top-spot is also at stake. Madrid’s 3-2 loss at Sevilla last weekend put more pressure on Benitez as Luis Enrique’s men moved into top spot. Now Benitez needs the perfect formula to get the fans back onside with a big result.

The ‘BBC’ has been restored to action after Gareth Bale returned against Sevilla while Karim Benzema stepped up his own return to action in training. With a weekend free from competitive action, the Frenchman could be in-line for a return in the big one, and if he regains the form he had before his injury, it will be a big boost for Los Blancos. The danger man will be reigning Ballon d’Or holder Cristiano Ronaldo. The Portuguese has been in top form this season having scored eight goals with two assists, in just 11 games – keeping him quiet will be extremely difficult. 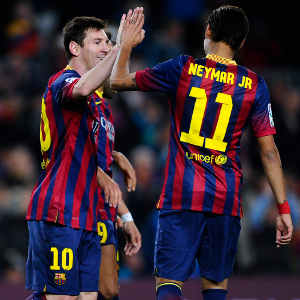 Barcelona
Barcelona are in a rich vein of form currently, and unlike Real Madrid, head into the Clasico in good shape. The La Liga champions are unbeaten in their last eight games in all competitions with seven wins. However, the Catalans have been beaten twice away from home this season with defeats against Celta Vigo and Sevilla. Although, Barca did manage to beat Getafe 2-0 in their last away match. Barcelona lie top of the table with three points above second-place Real Madrid and Luis Enrique will be hoping to extend their lead at the summit.

Sergio Busquets limped out of Spain’s 2-0 win over England with a hamstring complaint, but reports suggest that he will be fit for the El Clasico. Busquets is one of the mainstays of Enrique’s side, having anchored the Blaugrana midfield for many years while the likes of Lionel Messi, Neymar and Andres Iniesta have the freedom to attack. Enrique will be happy to have his tempo-setter sitting at the base of Barca’s midfield and will also be hoping to have Messi available after a long injury layoff.

Messi is the top scorer in the derby with 21 goals. The Argentine hasn’t played since suffering a knee injury in September, but has returned to training and has been battling to get fit. While Messi’s return would surely be welcomed, Barcelona have fared well without him. The Catalan club has won seven of nine matches since Messi went down, losing just once in their domestic league.

Much of the success has been due to the stellar performances of Neymar and Luis Suarez, who have been leading the Barca attack in Messi’s absence. Neymar has scored 10 goals and provided six assists while Suarez has 10 goals and three assists. These players are hitting Messi numbers. Neymar especially has taken on the role of creative playmaker for Barcelona, being the man to drop back deep when needed, to drive forward with the ball and take responsibility.

Verdict: Draw 53/20
Real Madrid remain unbeaten at home after five matches played with four wins. They’ve kept four clean sheets and have scored 12 goals. Barcelona have been in top form – unbeaten in eight games with seven wins. However, they’ve lost twice away from home this season. The Catalans have won four on the spin in La Liga and are tipped to earn a commendable draw at 27/10.