The much anticipated 2015 Telkom Knockout final sees last season’s league runner-ups Mamelodi Sundowns take on PSL Champions Kaizer Chiefs. Tickets for this year’s final were sold out after just three hours, which goes to show just how much fans of the two giant clubs are looking forward to this humdinger of a final. 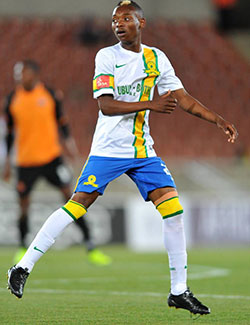 Mamelodi Sundowns
It has been a great cup run for Sundowns who claimed a routine 2-0 victory over Chippa United on home soil in the round of 16. The Brazilians then demolished Free State Stars 6-1 in front of their own fans to set up a semi-final meeting with SuperSport United. Sundowns beat Matsatsantsa 3-1 in the Tshwane Derby at the Lucas Moripe Stadium to book a spot in the Telkom Knockout final.

The Brazilians have also impressed in the league, where they currently lie second on the table behind surprise leaders, Bidvest Wits. Under Pitso Mosimane Sundowns have managed to bring silverware back to Choorkop in recent years, winning the Absa Premiership and Nedbank Cup in the last two seasons, and he will now be hoping to become the first Sundowns coach to win one at the expense of the Glamour Boys. Downs will be looking to get their hands on the trophy that has evaded their grasp since 1999 – when it was still known as the Rothmans Cup – and the Brazilians definitely have the quality among the team to do so.

Khama Billiat has been impressive for Sundowns this season. He has established himself as one of the top players in the league – although mainly operating as a winger, the Zimbabwean superstar can also take up the number 10 role. Billiat has quick feet, and pace to get past opposing defenders at will.

Keegan Dolly, Bongani Zungu, Teko Modise, Themba Zwane and Hlompho Kekana are all quality players that will be fighting for a starting berth against Chiefs. Dolly has pace and trickery, while Zungu as well, gets in behind defenders with his speed and tireless running. Zwane has plenty of speed and power, along with an eye for goal, while Kekana will anchor in the middle of the park, breaking down play as he does so effortlessly.

Although all of the above mentioned players have an eye to pick a pass, Modise arguably stands out. He has the vision and creativity to find and unleash his teammates. That is just a taste of the quality the Brazilians posses. Kaizer Chiefs
Amakhosi will be looking to put the disappointment of losing the MTN8 final to Ajax Cape Town firmly behind them. Chiefs advanced to the final of the Telkom Knockout thanks to a 6-5 penalty shootout win over Orlando Pirates at FNB Stadium. The match remained goalless after extra-time, which resulted in spot kicks. Their other results in the competition included a 3-0 victory at Platinum Stars in the last 16, prior to a hard fought 2-1 win away to Mpumalanga Black Aces.

Chiefs currently lie fourth on the log in the league, five points off their opponents Sundowns. George Lebese has been Amakhosi’s best player with five goals in the league – only Free State Stars striker Andrea Fileccia and Black Aces’ Collins Mbesuma have more than him with six goals each. Bernard Parker and Edward Manqele form a vital combination up front, supporting one another – looking almost in sync.

Siphiwe Tshabalala will offer the Glamour Boys pace and tremendous skill out-wide, swinging in delicious deliveries for his teammates, while he could also cut inside to make those inch-perfect through-balls or to simply have a go. Chiefs’ main injury concern is Itumeleng Khune, who underwent a successful surgery on his knee, will miss the final but is now starting his rehabilitation before returning to action.

The Glamour Boys are the only unbeaten team on their travels in the league, but have drawn five of those six games. Chiefs will go into the final against Sundowns knowing that they have never lost to them in a cup final. Amakhosi have played Masandawana in eight cup finals since 1971, and have not been beaten in any of them, winning the TKO, Nedbank Cup and MTN8 trophy at the Brazilians’ expense on at least one occasion.

Verdict: Draw 22/10
Three of the last five meetings between the sides have been separated by a single goal – with Chiefs winning twice, Sundowns claiming a victory once and the draw occurring two times. There is very little between the pair – making this a cagey affair. The draw is the predicted outcome after 90 minutes.